Part of the beauty of college basketball is the fact that with 351 division one teams there are so many home courts, and each one is different from any other in the country. College basketball games have also been played in many different locations from hotel ballrooms, to NFL stadiums, to even the deck of an aircraft carrier. These locations are usually for special events or tournaments, but there are four programs that are unique in the fact that they play their home games in domes instead of arenas. These buildings are often cavernous and have temporary bleachers put up on sides of the court. As a result, this can create some unusual feelings and sightlines for visiting players who might only play one game a year or even in their entire career at these venues, and this gives an advantage to the teams who call these venues home.

Honorable Mention: The South Dakota Coyotes of the summit league used to call the DakotaDome home for their basketball program from 1979-2016. The venue was shared with football. 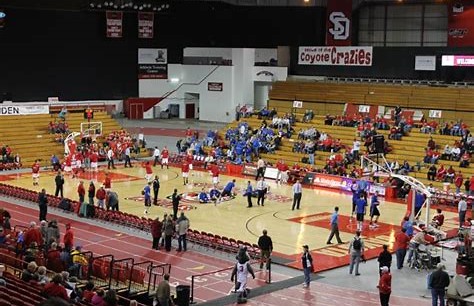 4) Cowen Spectrum University of Idaho Vandals – This venue seats 7,000 exactly for basketball. The first game was against longtime rival Washington State on Jan 21 1976 in front of Idaho Alumni Gus Johnson. As if having a dome is not enough of an advantage for the first 8 seasons the vandals played on smooth tartan rubber, that was poured directly onto the pavement floor. This hard unforgiving surface gave the vandals an extra advantage. 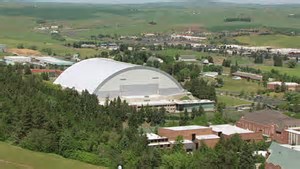 Photo from soeglive.com
3) Holt Arena Idaho State University Bengals – This is the oldest dome in college basketball having opened in 1970. It seats 8,000. Two out of the three college basketball home courts in the state are domes; the only one that is not is Taco Bell Arena home of the Boise State Broncos.

Photo from Athalonsports.com
2) Walkup Skydome Northern Arizona University Lumberjacks – Starting to sense a trend? This is the third Big Sky Arena on this list. The lumberjacks play all of their home games at the Walkup Skydome. The dome was named after former NAU president John Lawrence Walkup who raised the $8 million funds to finance the building by a number of unusual methods including raising a fourth of the money need from decades of vending machine revenue. This is the world’s largest clear span cedar dome. The lumberjacks play in the second highest elevation of a court in college basketball at 6,680 feet second only to Arena Auditorium in Laramie Wyoming at 7,220 feet. In 2011 the building underwent a renovation to the tune of 26 million dollars.

Photo from reddit.com
Walter Pyramid Ling Beach State 49ers – Even though this structure is clearly not a dome it is still one of the most unusual home buildings in all of college basketball. The Walter Pyramid stands at 18 stories tall, and is exactly 345 feet on each side making it one of only three true pyramid structures in the United States (the other two being in Memphis and Las Vegas). This Big West venue seats 5,000. It was even featured on an ESPN broadcast as part of the #MyHomeCourt series. The unique home court has helped in getting good opponents to play the beach at home because in the past 5 years North Carolina, Creighton, BYU, and San Diego State have all made trips to the beach to play in the pyramid.

1) Carrier Dome Syracuse University Orange – A list of college basketball domes would not be complete without including the carrier dome home of the Syracuse Orange. This building has hosted the NCAA Basketball Tournament East Regional semi-finals & finals seven times in 1983, 1997, 2000, 2002, 2005, 2010, and 2015. The carrier dome holds the record for the largest on campus attendance at a college basketball game a mark which was set on February 1st 2014 against Duke when 35,466 people attended the game. The previous record was also held by them. The dome also holds the record for largest crowd at an NIT game with a crowd of 26,752 at a second round matchup in 2007 against San Diego State. In the end when it comes to tradition and history no other building on this list can come close to what the carrier dome has.

Photo from Daily Dose of Hoops