Posted by ethanhennessy on August 21, 2018 in Uncategorized |One Comment

wwnrradio.com
75 miles through the Appalachian Mountains along I-79 separate the University of Pittsburgh and the University of West Virginia. The Backyard Brawl is what the fans call it, and West Virginia vs. Pitt was one of the classic rivalries of the old Big East (yes that Big East back when South Florida and Rutgers were in the conference). The rivalry was put on pause though after 2012 when WVU moved to the Big 12 and Pitt moved to the ACC. The good news for fans though is the series has picked back up. The two teams played this year in Pittsburgh with the mountaineers beating the panthers 69-60 to improve to 97-88 all-time against Pitt.
Number 9
Iona vs Manhattan 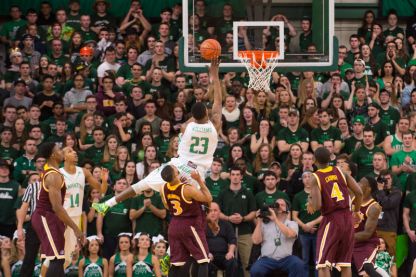 gojaspers.com
Iona and Manhattan? Really? Yes really! Having grown up on MAAC Basketball I can tell you without a doubt the Metro Atlantic Athletic conference has some great mid major rivalries there is the battle of the bridge between the two buffalo area schools Canisius and Niagara. There is the rivalry between the MAAC’s two most successful programs Siena and Iona. However, nothing compares to the Manhattan vs. Iona rivalry. Manhattan Coach Steve Masiello when asked about the rivalry has said “I’ve played in Kentucky-Louisville, there is no difference in the feelings”. These schools are separated by only 8.6 miles that is less distance than North Carolina and Duke. Since 2012 one of the two schools has been in the NCAA tournament every single year with Iona going 2012-13 and 2016-18, and Manhattan going 2014-15. Iona leads the all-time series 55-40.
Number 8
Kansas vs Kansas State 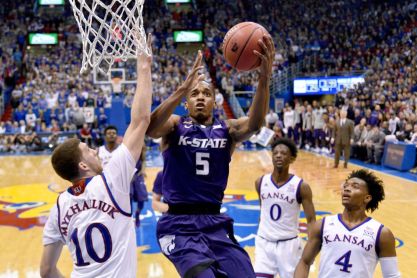 bringonthecats.com
This rivalry is the one on the list that has the most “big brother little brother” feel to it. That is not intended to be a shot at K-State if you go to their Wikipedia page you will see Kansas State has some great history, it is just very hard to compete with Kansas. The sunflower showdown as they call it has been an uphill battle for the wildcats they lost 31 straight games from 1994-2005, and since then they have only won 5 of the past 30 a lot of the games have been very competitive, and Kansas State has done just as good as most at trying to dethrone the Jayhawks stranglehold on the Big 12. Kansas leads the all-time series 196-93.
Number 7
Army vs Navy

Baltimoresun.com
This is the matchup most often overlooked when it comes to the rivalries in this top ten list. Sure most people know of the fierce rivalry between Army and Navy on the football field, but actually the intensity is there whenever the two service academies compete in any athletic event. Names such as Mike Krzyzewski, Bob Knight, and David Robinson have written their chapters in this history rivalry that dates back decades. The midshipmen hold the all-time advantage in men’s college basketball 78-50. However, Army has perhaps the most memorable moment in recent years in the rivalry when on February 18th 2017 the black knights came back from down 25 points in the second half thanks to 12 straight made field goals to stun Navy 71-68 in Annapolis.
Number 6
Arizona vs UCLA

Zimbio.com
Arizona and UCLA combined have accounted for 22 of the 30 regular season PAC 12 men’s basketball titles, and 8 of the 17 conference tournament titles. They are the two best programs in the history of the conference, and without them the PAC 12 would be a very different league in regards to its national prestige. Former Stanford and Cal coach Mike Montgomery stated it best “If those two are not good, the conference is not perceived as being good. People don’t give credit to the schools across the board in the league.” The bruins and wildcats have faced off exactly 100 times even, and UCLA holds a 57-43 advantage, but that is mainly due to UCLA winning 21 of the first 23 matchups from 1923 to 1984.
Number 5
Cincinnati vs Xavier

downthedrive.com
The Crosstown Shootout is the battle for the queen city (Cincinnati Ohio). This is the only major college basketball rivalry where both teams technically share the same city (the schools are only three miles apart). Cincinnati and Xavier hold the title of the most memorable fight in college basketball history when during a blowout game at the Cintas Center in 2011 a major benches clearing brawl erupted. Cincinnati coach Mike Cronin famously said in the press conference after the game I have to review the tape with my president and AD, and see who is still on the team. While there hasn’t been an incident like that since 2011 the animosity is still there between the teams, and these games generally mean even more as both teams are usually in the top 25. Cincinnati leads the series 50-35.
Number 4
Indiana vs Purdue

idsnews.com
There is a sign that hangs in the gift shop at Bankers Life Fieldhouse in downtown Indianapolis that says “In 49 states it’s just basketball, but this is Indiana”. I am not originally from the Midwest, but having lived in Indiana for the past two years while attending college I can say that phrase is completely true. Whether it be high school, college, or NBA people in Indiana love their basketball almost in a religious sort of way. Therefore, it felt only appropriate to put the state of Indiana’s biggest college basketball rivalry on this list. The hate between these two is real. So much so that in Purdue’s fight song they have a section where they chant “IU sucks” every time irrespective of whether they are actually playing the Hoosiers in that specific game or not. Purdue does lead the all-time series 118-89, and edges out Indiana in Big Ten Championships 24-22, but Indiana leads the boilermakers 5-0 in national championships.
Number 3
Michigan vs Michigan State

maizenbrew.com
Every year that I have been alive at least one of these two teams has been playing in the NCAA tournament, and most years it is both. You will be hard pressed to find two programs that have more NCAA tournament success especially in the past three decades. In that time the duo has become a mainstay in the second weekend and beyond of the tournament combining for 23 sweet 16’s, 12 final fours, and two national championships. While the Spartans boast the more legendary coach, better student section, and more famous arena; the wolverines hold the head to head edge in the series 100-81. There have also been many players who went on into the NBA to suit up for the green and white and the maize and blue such as Draymond Green, Denzel, Valentine, Nick Stauskas, and Trey Burke.
Number 2
Kentucky vs Louisville

wildcatbluenation.com
The Kentucky vs. Louisville rivalry is unlike many of the other ones on this list simply in the fact that they are not in the same conference. Actually, since they don’t have a regular schedule of playing each other they only faced off 12 times from 1913 to 1983. Kentucky has dominated the series overall (35-16), but also recently (winning nine of the last 11 including final four and sweet 16 games). Despite the lopsidedness in outcomes it is still a good rivalry because Kentucky is 1st all-time in NCAA wins, and Louisville is 11th.
Number 1
Duke vs UNC 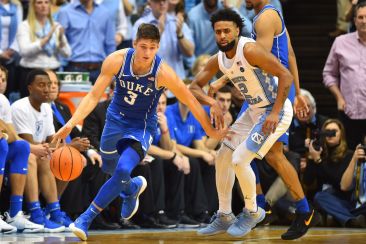 sportingnews.com
You knew this was number one. It has to be Duke and North Carolina is not only the best rivalry in college basketball, but might be the best in all of sports. These are arguably the two richest programs in terms of their track record of success. There is a reason their games are always prime time on ESPN, and every time they play it is a meaningful game too either in the ACC or for March Madness, or both.