Posted by ethanhennessy on November 30, 2018 in Uncategorized |No Comments

On Wednesday night we were treated to a rematch of last year’s Big Ten/ACC Challenge game in Atlanta. A few things had changed though some key players for both sides had departed. Northwestern was without Bryant McIntosh, and Georgia Tech had seen Ben Lammers and Josh Okogie depart. Also, the location was shifted to the newly renovated Welsh Ryan Arena in Evanston Illinois. When asked in the post game press conference what he though of the building Georgia Tech coach Josh Pastner immediately said “Oh, its a lot of purple, but its a beautiful building”.

Welsh Ryan Arena in 2018 after renovations. 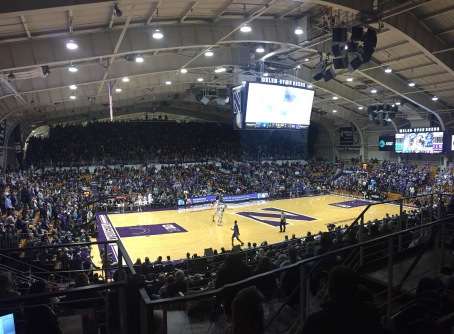 Welsh Ryan Arena in 2016 prior to renovations.

Northwestern stormed out to a commanding early lead (13-5) shortly into the first half. Northwestern was causing turnovers and blocking shots all throughout the first half. This was also compounded by the fact that Georgia Tech shot 54% from the free throw line in the first half (7-13), and a dismal 25% from the field (6-24). At the half after a wildcat buzzer beating three Northwestern had doubled up GT 40-20, and the game seemed just about over.

By the first timeout in the second half Northwestern was up 28, but that is when things started to change.

The Yellow Jackets slowly chipped away at the lead for the remainder of the game. Northwestern coach Chris Collins said that the team was tired and just ran out of gas after playing their fourth game in the past seven days with a cross country flight. A large reason for the narrow six point win for Northwestern despite being up 28 was thanks to Georgia Tech’s scrappy guard Jose Alverado. Alverado finished with 24 of the jackets 61 points. 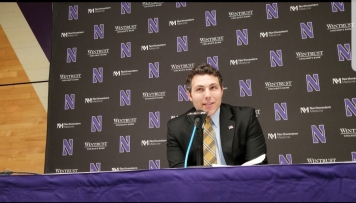 When asked about his guard in the press conference coach Pastner stated “We rely a lot on Jose because he is our point guard, but the stat line I’m a little more worried about is that zero assist four turnovers. That has to be switched zero assists four turnovers… but he plays hard all the time; competes… and I love Jose.”

The Big Ten took this game of the challenge by a final score of 67-61 Northwestern, but the two leagues showed they are well matched as the overall challenge ended in a draw. Up next for the wildcats now 6-1 is a trip to Assembly Hall to take on Indiana on Saturday. Meanwhile Georgia Tech (4-2) heads down to American Airlines Arena in Miami to take on the Red Storm of Saint John’s.