Posted by ethanhennessy on January 23, 2019 in Uncategorized |No Comments

February 3rd 1973. That was the last time Northern Illinois had beaten a ranked opponent (number 19 Oral Roberts), that was until Tuesday night. On a cold night in DeKalb Illinois that only saw 1,284 people file into the convocation center due to a ice storm moving through the area the Northern Illinois University Huskies defeated the 14th ranked University of Buffalo Bulls 77-75. Everybody in attendance was treated to a game they will remember for years to come.

Buffalo entered the game 17-1, and 5-0 in the Mid American Conference. They were ranked 14th in both the Associated Press and Coaches Polls. Following their defeat I asked coach Nate Oats after the game if he felt like the team would be able to relax more now knowing that the expectation of going through MAC play with a perfect record is no longer there? 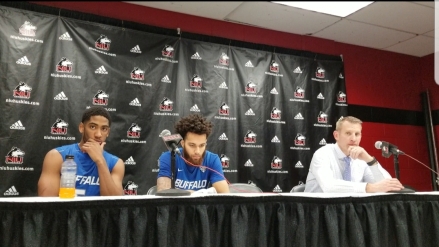 Buffalo going into the game had only let one opponent all season shoot 50% or greater from the field. NIU shot 50%. The Huskies also outrebounded the Bulls 40-37, and that slim margin on the glass proved to have a big impact on the game Oats said “Yeah, obviously if you make more threes it helps you out. We would like to win games even when we don’t make it. If we make one more we win, but it shouldn’t come down to that in my opinion. It should have been taken care of on the rebounds, defense, and energy.”

NIU was led offensively by Dante Thorpe who scored 23, and reigning Mid American Conference player of the week Eugene German who contributed 20.

Levi Bradley of NIU pulling up for a jumper.

Buffalo took the lead early thanks to some hustle plays, and getting out in transition. Northern Illinois countered back later in the first half thanks to some good rebounding, and the crowd’s energy. They took a 38-32 lead into the break. They opened up the lead to 10 by the 17:29 mark in the second half. I as well as everyone in the building was stunned. However, Buffalo rallied back to retake the lead, and the teams went back and forth throughout the rest of the game. There were six lead changes and six ties in during the game. Buffalo had the lead for 19:39 of game time, and NIU possessed the lead for 15:06.

The final few possessions was where things got interesting. With everyone in the convocation center on their feet and loudly cheering NIU had a breakaway layup to go up four 75-69. Eugene German fouled out of the game fouling CJ Massinburg on a three pointer. He made all three with 47.1 seconds left. After being unable to convert NIU gave the ball back to Buffalo. 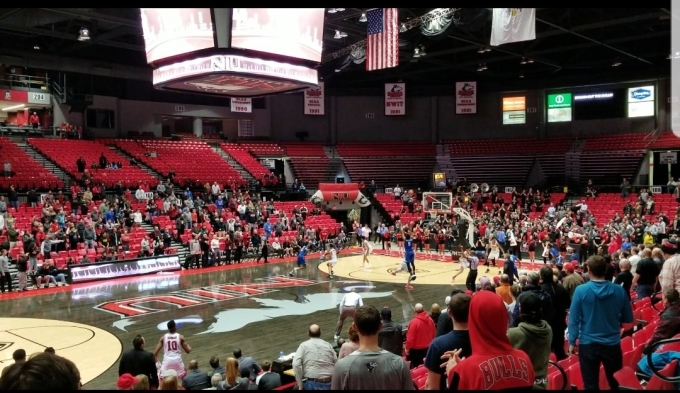 Massinburg’s contested three to tie the game at 75 with 11 seconds left.

Massinburg hit a contested three to tie, but NIU ran a slip play with their center Noah McCarty cutting to the basket for an open layup to take the 77-75 lead. The crowd stormed the court only to have to vacate it to play the remaining 0.6 seconds. Buffalo’s deep lob pass was intercepted, and the NIU students stormed the court again.

As for number 14 Buffalo they will continue the road swing traveling to Kent State for a Friday night game. NIU will also head to northeast Ohio to take on Akron on Saturday.

NIU left the final score on the scoreboard reportedly until the women’s game the next night.

“I don’t want to see them in the MAC tournament, but we very well may. They’re a good team.” – Nate Oats