Posted by ethanhennessy on March 26, 2019 in CBI |No Comments

Shabooty Phillips and the Longwood Lancers rolled into Chicago looking to spring one of the biggest upsets in the 2019 CBI by stealing a road win at Big East member DePaul. Head coach Griff Aldrich preached in the morning shootaround leaving everything out on the floor saying they did not want to leave this gym or leave this tournament wondering if they could have given just a little more effort.

The Lancers did give it absolutely everything they had; they just ran into Max Strus of DePaul who scored 38 points. In talking with Longwood coach Griff Aldrich after the game I mentioned I noticed you gave a little high five to Max Strus on his way out of the game at the end what was your game plan to try to contain him.

He laughed and said “Well it didn’t work. We wanted Max to have to work for his points, and in one way he really did. He is a heck of a player, and the thing that is really good about him is his physicality and his basketball IQ. We’re just not used to playing that level of physicality in the Big South that also shoots the ball that well. I thought he made a bunch of tough shots. One of the DePaul coaches told me I thought you all (Longwood) had us beat we just had Strus tonight.”. Strus has scored 71 points for the Blue Demons through the first two rounds of the college basketball invitational.

The game was off to a quick start. DePaul led 12-11 by the first timeout, and it appeared we were in for a shootout. After building up a lead of as much as 18 early in the second half. Longwood went on runs to eventually tie it at 79 heading into the under four timeout in the second half. DePaul was able to use the home crowd’s energy, and make a few critical plays such as a Strus charge, and conversion on the other end with a little over a minute left to put the game out of reach for good, and give the Blue Demons the 97-89 win. 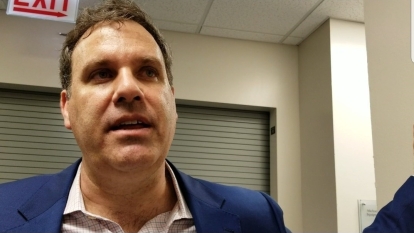 Griff Aldrich head coach of Longwood talking about his team after the game.

Longwood’s historic season came to a close after making their first postseason appearance in division one and winning their first postseason game. Griff Aldrich said “This year was about trying to establish who we are as a program. A lot of that is to be aggressive to be tough… I just can’t say enough about how proud of them I am in what they have given to the program and the University. I think we were very successful in building a strong foundation of who we want to be, and what this program will be moving forward”.

For DePaul they advance to the final four of the CBI. They will host the Chanticleers of Coastal Carolina out of the Sun Belt back inside McGrath Phillips on Wednesday night at 7PM.