Posted by ethanhennessy on January 27, 2020 in CBI, CIT |No Comments

Hello everyone! We are in the heart of conference play. February is almost here, and that is when the CBI/CIT bracketology always ramps up. If you are unfamiliar with my work I predict the fields of the College Basketball Invitational (CBI), and the CollegeInsider.com Postseason Tournament (CIT). They may not be the NCAA Tournament, or even the NIT, but there is still high quality basketball being played in these postseason tournaments in March and April.
My background: I am a senior at Valparaiso University in Valparaiso Indiana originally from Columbia Maryland. In addition being a crusader fan I have been a lifelong Loyola MD fan. This is my third year being the lead national bracketologist for these tournaments. Last year I had a 93% accuracy rate correctly predicting 39 of the 42 teams in both fields. From press row I also covered all five home games of DePaul’s run to Game 3 of the CBI finals watching the South Florida Bulls claim the 2019 CBI Title. I attended Loyola MD’s 2013 CIT second round win over Kent State, and the greyhounds 2017 CBI first round win over George Mason.
This year I am organizing teams by regions. For the CIT I just grouped teams by geographic area. This does not indicate who I anticipate teams will be playing; I just decided to do it this way so that fans could easily find if their team is projected in the field by just going to the geographic region instead of searching through the entire list of teams. For the CBI I decided to group teams in four team “regions”. The CBI does this for the first and second rounds before re-seeding the bracket for the semifinals and finals. Out of the 16 teams I project in the field I chose the teams that I believe the CBI would be most likely to have host game in the first two rounds (assuming said team would win their first round game). The tournament generally likes to keep these four pools grouped based on geography, but sometimes that does not happen because of which teams have a preference for hosting or traveling, team record, and the overall makeup of the 16 team field. Therefore, I try to group teams into four regions (East, Midwest, South, and West), but all of this has to be factored in, and just like the NCAA tournament could result in a team getting sent out of the region they reside in. The order in which the four teams appear in each region are not best to worst team it is who I think would be most likely to host top to bottom.

*As always I do not rank teams that are first or tied for first in their conference because if the season ended today they would be going to the NCAA Tournament or NIT. (With the exception of teams in transition to division one who are ineligible for the NCAA or NIT such as Cal Baptist, Merrimack, and North Alabama.)

If you are a coach, AD, player, manager, broadcaster, SID etc. associated with a program, and would like to let me know if your team is participating or interested in one of these tournaments (or not participating) either on the record or off the record email me at: HappeningHoops@gmail.com or DM me on Twitter @ Happening Hoops
Receiving information from programs helps me be more accurate in my predictions which can also in turn help teams by getting a better idea of what the fields will be and possible teams they could face in the tournaments. 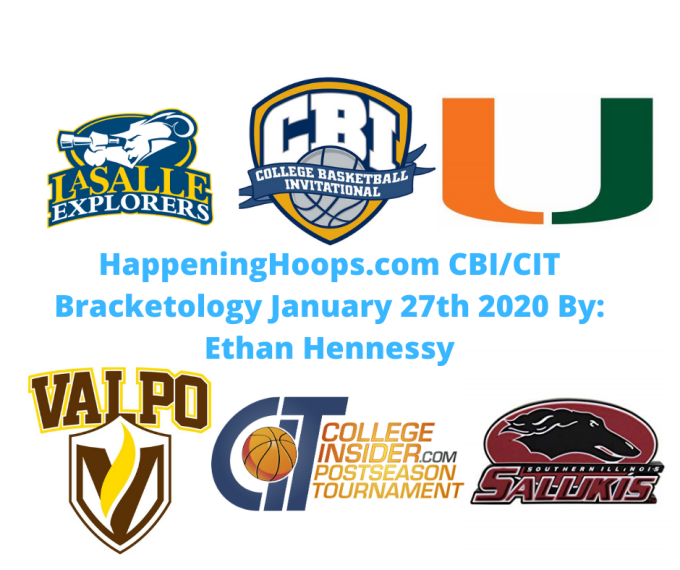 The featured teams on this week’s bracketology are: La Salle, Miami, Valparaiso, and Southern Illinois.