Posted by ethanhennessy on February 7, 2020 in Chicago State |No Comments

Thursday night’s Western Athletic Conference matchup between New Mexico State and Chicago State on Chicago’s South Side had it all. A marketing intern turned walk-on hit a three pointer, Chicago State played the final twelve minutes of the game with only five players due to injuries and players fouling out, and one of the players on the court for CSU had chipped his tooth earlier in the game. When it was all said and done New Mexico State walked out of the Jones Convocation Center with a 71-49 win extending their winning streak against conference opponents to 27 which is a current national record.

The defending WAC champions came out of the gate slow. New Mexico State was only leading 16-15 nearly fifteen minutes into the game. However the Aggies then used an 18-2 run over the final five minutes of the first half to take a 34-17 lead into the locker room. Chicago State’s playmaking guard Xavier Johnson picked up four fouls in the first half. The second half saw New Mexico State come out with some fire extending the lead even further. As the Aggies lead grew the number of players available for Chicago State shrunk. Chicago State only started the game with seven available players due to injury. Xavier Johnson despite starting on the bench picked up that fifth foul by the first media timeout. Another key contributor for the green and while Rajeir Jones had fouled out by the second media timeout of the second half. Chicago State had to rush Carlo Marble back onto the floor who was on the training table being tended to for chipping a tooth moments before while diving on the ground for a loose ball. Chicago State then played the final 12:06 of the game with only the five players on the floor. Much to their credit though all the remaining cougars were able to avoid fouling out. Lance Irvin head coach of Chicago State said after the game “The main thing was just telling guys you have three fouls, you have four, you have two, and just don’t foul. The way you don’t foul is just don’t put your hands on people. The one thing I kept telling guys is you got to think, move with your feet, and please don’t put your hands on nobody we gonna end up playing with four guys.”

On the other end New Mexico State brought Bryce Rewalt into the game who began the year as a marketing intern in the New Mexico State athletic department and a manager on the team. However, he was offered a walk-on spot when the Aggies suffered multiple injuries at the guard position. Within twenty seconds of checking in he knocked down a three pointer, and the Aggie fans in the stands erupted. New Mexico State later got their other walk-on Tennessee Owens into the game who also managed to get in the final box score hitting a three pointer in his season high 4:18 on the floor.

“This whole season has been a whirlwind for me, but its a ton of fun especially getting to play tonight.”  – Bryce Rewalt 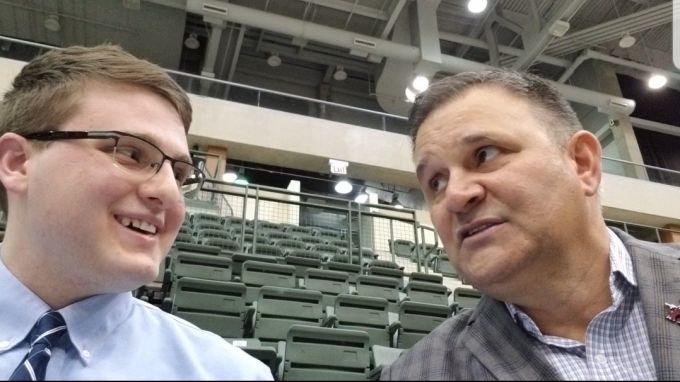 Talking with Chris Jans of New Mexico State after the game.

After the game Chris Jans head coach of New Mexico State credited Chicago State by saying “Lance’s win total is not reflective of how hard his team is playing. They were flying around for all forty minutes”.

New Mexico State was led by Shawn Williams who had fifteen points two assist and a rebound. Jabari Rice also contributed twelve points six boards, and one assist. For Chicago State Andrew Lewis led the way with twelve points, three rebounds, and one helper. Kalil Whitehead also scored in double figures contributing ten points, two rebounds, and one assist. Despite four cougars playing 34+ minutes, and having a clear size disadvantage they did outscore New Mexico State 22-14 in points in the paint.

Up next for Chicago State they close out this three game homestand by welcoming UTRGV to the Windy City on Saturday before hitting the road for five of their final six WAC games. New Mexico State continues the Midwest roadtrip going to Kansas City to take on a Roos team that has given them their toughest test thus far in league play a 74-71 Aggie victory in Las Cruces on January 11th.