Posted by ethanhennessy on February 14, 2020 in Uncategorized |No Comments

Penn State entered Tuesday night’s game at Purdue ranked thirteenth in the nation according to the AP poll. This was the highest ranking for the Nittany Lions since the 1995-96 season. PSU was ridding a six game winning streak which most recently included a win at Michigan State followed by a sellout win over Minnesota in Happy Valley. This was the first time Penn State had a sellout at the Bryce Jordan Center in nine years! Purdue on the other hand was coming off a win against their rival the Indiana Hoosiers at Assembly Hall in Bloomington.

#13 Penn State wasted no time roaring out to a quick lead. They drained four of six three pointers to start. This was part of a long range shooting effort that saw them net ten threes in just the first half! The Nittany Lions weathered the storm in between the under eight and under four timeouts of the first half that saw Purdue go on a run of their own, and get the home crowd into it. Purdue cut the lead at one point to 31-26, however, PSU led by 12 at halftime 42-30.

Penn State continued the momentium winning the first four minutes of the second half by going on a 9-0 run. While Penn State was scorching from behind the line Purdue was ice cold. The boilermakers did not his a three pointer until nearly 27 minutes into the game. When I asked Matt Painter about this specifically after the game he said “They limited our threes… we are a team that really stresses we will take what you give us…. we are not in a position to say this is who we are every night. I thought we had the ball at the rim a lot in that first half, but we came up empty handed.

Just like late in the first half Purdue made a late second half run, but it was too little too late as Penn State held on to pick up only their third win ever in Mackey Arena despite playing in the same conference. I asked Patrick Chambers what they key to his success was as I had personally witnessed with my own eyes Penn State march into the Breslin Center and then Mackey Arena, arguably two of the toughest venues in the Big Ten and on a shortlist for toughest in the country, and walk out with a win both times. 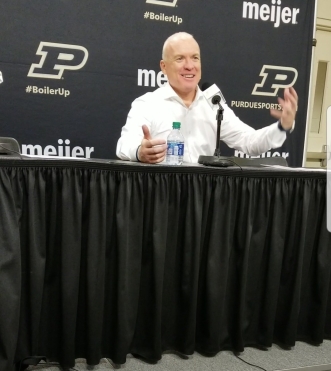 Pat Chambers is the frontrunner for Big Ten coach of the year for the season Penn State has had. The Nittany Lions are 19-5, second in the Big Ten, and number 13 in the country. They could make a deep run in March.

He said “I’m keeping it fun, and when we do work we work. We’re going hard, competing, and getting better, but when it is time to have a good time and time for these guys to connect I think that is important that they are playing freely and playing with confidence. I’m telling you that if we weren’t doing that we don’t win this one.”

Purdue hits the road next heading to Columbus to face Ohio State on Saturday. Penn State heads back to State College Pennslyvania as they will face the Northwestern Wildcats.